"There's a couple arguing at the foot of the King's Bridge. Somebody intercede!"
― Daniel Pollini while patrolling Gracemeria[1]

Commander Daniel Pollini,[a] callsign Windhover, is an Emmerian pilot and member of the Republic of Emmeria Air Force. He led the 8th Air Division's 15th Fighter Squadron, which would later be known as Windhover Squadron.[2]

Pollini is said to be a passionate man who inspires those flying alongside him. His clear judgment in battle made him out to be an invaluable flight lead and ally to the Garuda Team. Emmerian assault records regard him as one of the key figures who helped win the Emmeria-Estovakia War.[2]

Daniel Pollini participated in defending Gracemeria during Estovakia's invasion. He, alongside the rest of the Emmerian Air Force, almost managed to repel the Estovakian invasion before Nimbus missiles launched from the P-1112 Aigaion quickly turned the tide of battle, forcing Pollini and Emmerian forces to retreat west.[3]

After arriving at Vitoze with the majority of the Emmerian forces, Pollini decided to organize a new squadron of pilots for the 15th Fighter Squadron of which he commanded.[4] This squadron would later come to be known as Windhover Squadron.[2][5]

After aiding in the defense of Vitoze,[6] Pollini and his squadron participated in numerous operations alongside Garuda Team. On multiple occasions, he and his squadron worked in tandem with Warlock Separate Battalion. Most notable of Pollini's achievements include playing a key role in liberating San Loma ,[7] Gracemeria,[8] and Ragno Fortress,[9] as well as helping destroy the Aerial Fleet[10] and the Chandelier railgun.[11] 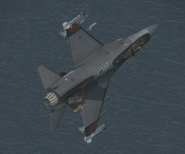 from Ace Combat Infinity
Add a photo to this gallery

Retrieved from "https://acecombat.fandom.com/wiki/Daniel_Pollini?oldid=258625"
Community content is available under CC-BY-SA unless otherwise noted.