"I'm all over this. I could do it in my sleep."
― Doug Robinson prior to the liberation of Moscow[1]

Born in Brooklyn, New York in 1972, Doug eventually joined the United States Army as a helicopter pilot prior to 1990. During the Gulf War, he was part of an AH-64 attack helicopter unit that performed improvised carrier operations against the Iraqi military.[2] After the war, he became a captain.

In late 2015, Doug and his Shooter Squadron were inducted by NATO into Task Force 108, where he became the leader of the Nomad gunship unit during an anti-insurgency campaign in East Africa sanctioned by the United Nations. He was the first person of TF108 to encounter the Trinity weapon in their hands, having survived a warhead's explosion during a helicopter operation against local guerillas.

Following the rebels' air attack on the NATO airfield in Hamada, he and his men rescued Sergei Illich from the rebel settlement "Alpha Delta", where he accidentally destroyed a Trinity warhead loaded in a rebel convoy, which forcibly threw his Apache back. The next day, his team escorted Delta Force troops during a mission to destroy insurgent weapon stockpiles in Mogadiyu.

When the Blatnoi syndicate revealed themselves to the world with the destruction of Carruth, Robinson, along with Bishop's team and French Armee de l'Air members, were moved to west Asia on the aircraft carrier CVN-30, and participated in an boarding operation against container ships in the Suez Canal suspected of being used to ferry Trinity materials.

During the New Russian Federation's coup d'état in Russia, he and Shooter were moved to a loyalist air base in Volgograd during the NATO-led campaign against the movement. During the siege of Moscow, he assisted loyalist ground forces in the NATO siege of Moscow in January 2016, single-handedly destroying the troops and missile trucks surrounding the Kremlin.

In desperation, the Blatnoi launched a Trinity missile that destroyed the suburban area of the city, which Doug's co-pilot noticed at the last moment. He miraculously survived the explosion and continued to battle NRF troops in the ravaged capital.

Personality-wise, Doug serves as a strict, yet fatherlike figure to his allied pilots. He's known to have a good friendship with Jose Gutierrez, shown by how the two joke and bet with each other a lot. They are often heard communicating during missions.

An official image of Robinson 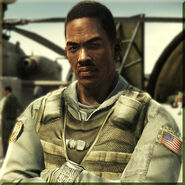 Avatar
Add a photo to this gallery

Retrieved from "https://acecombat.fandom.com/wiki/Doug_Robinson?oldid=244344"
Community content is available under CC-BY-SA unless otherwise noted.