is a Special Aircraft variant of the EA-18G Growler featured in Ace Combat Infinity. It features a brown camouflage based on the EA-18Gs used by Beast Squadron in Toy Box in Ace Combat: Assault Horizon Legacy. Compared to the stock EA-18G, the -Beast- mainly features improved mobility and defense. 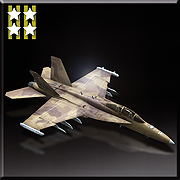 "An EA-18G special aircraft based on aircraft from the "Beast Squadron," a fighter squadron that fought during an internal United Nations conflict. Considering the nature of the squadron, engineers predicted a need to accommodate situations where wingmen support is unavailable and hence made modifications to increase its evading capabilities and durability so that it can defend itself and raise the chances of the safe return of its pilot. Initially, there was a plan to equip a specially developed ECM in the original aircraft, however in the end an official ECM was equipped instead. Technicians checked the specially developed ECM but realized that the internal components were beyond anything that they were accustomed to. This resulted in the ECM from not being equipped in the original aircraft. This aircraft was added to the team when re-engaging with a special tactical fighter squadron and its electronic interference functions caused havoc on the enemy."
― Hangar

The aircraft was available in the Skilled Pilot Medal exchange. Players can exchange 20 medals to acquire the aircraft.

On June 15, 2016, the EA-18G -Beast-'s medal price was lowered to 20 medals, and its performance was slightly increased. The statistics displayed below are the current, post-boost statistics; click here for a partial list of the old statistics.
All players who purchased the aircraft at the original price received a full refund of 500 medals, almost all credits they spent upgrading the aircraft, and a Nonstandard Upgrade Request Form if one was used. (The Lv.6 price was refunded whether or not a form was used.) The aircraft's level was not reset.[1]

Nickname
Upgrading this aircraft to Level 20 unlocked the Wild Instinct nickname for use at any time.

Retrieved from "https://acecombat.fandom.com/wiki/EA-18G_-Beast-?oldid=266154"
Community content is available under CC-BY-SA unless otherwise noted.