The EA-6B Prowler is a four-seater jammer variant of the A-6E Intruder attack aircraft. While visually similar to the A-6E, the EA-6B is dedicated to jamming operations. However, it can also operate in air-to-ground operations.

The Prowler had seen limited use in the Strangereal universe.

The Prowler was known to see combat in the Belkan War[1], with Schnee 5 reportedly providing ECM support for Schnee Squadron as a notable example.[2]

In the Circum-Pacific War, a single Prowler, operated by the Yuktobanian Air Force, saw action during the Osean Air Defense Force' Operation Hammerblow.[3]

During the United Nations Forces' Operation Eternal Liberation, the EA-6B Prowler was made available as a multirole aircraft for UNF pilots to use.

"An electronic aircraft developed from the shipboard A-6 attacker.
A military aircraft with a crew of four including one pilot and three others to operate the electronics. It handles electronic interference and suppression of anti-air networks using air-to-surface missiles.
At one time it was used for electronic interference missions by the army, the air force and the navy. However, in recent years such duties have started to be transferred to the EA-18G.
It's[sic] nickname is the "Prowler."

The EA-6B Prowler is available through the Aircraft Tree, after purchasing various parts following the AV-8B Harrier II plus or Mirage 2000-5.

An EA-6B flying over Comona Base

An EA-6B flying over Stonehenge

An EA-6B flying over Stonehenge

An EA-6B flying over Tokyo 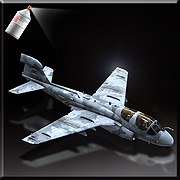 Flyby of the Event Skin #01 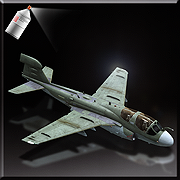 Hangar view of the "Schnee" Skin

Flyby view of the "Schnee" Skin

"This electronic warfare aircraft known as the "Prowler," not only provides active radar jamming to protect its allies from enemy fire, but is also a formidable air-to-ground fighter."
― Hangar

The EA-6B is unlocked after completing mission 6: Diapason. It costs 58,500 credits to purchase.

The EA-6B cockpit (left side)

The EA-6B cockpit (right side)

"This carrier-based electronic warfare aircraft is a variant of the A-6E. Known as the "Prowler," this plane provides active radar jamming support to protect its allies from enemy fire."
― Hangar

The EA-6B is unlocked by filling the Kill Rate Gauge on the A-6E Intruder. It costs Ƶ15,200 per plane.

Retrieved from "https://acecombat.fandom.com/wiki/EA-6B_Prowler?oldid=266112"
Community content is available under CC-BY-SA unless otherwise noted.