Acepedia
Register
Don't have an account?
Sign In
Advertisement
in: Articles marked for cleanup, Aircraft, UPEO,
and 6 more
English

View source
watch 02:40
World of Warcraft: Dragonflight - The Loop
Do you like this video?
Play Sound
pencil
All right, gentlemen, it's time to clean house!
This article or section may require a cleanup to meet Acepedia's quality standards.

Ace Combat 3: Electrosphere
The EF-2000E Typhoon II is a direct adaptation of the EF-2000 Typhoon to use the Connection for Flight Interface. Outside of the use of the "COFFIN" interface, the modifications done to the basic airframe appear minimal. Its manufacturer is the Joint Military Aircraft Company, under the direct supervision of UPEO.

The EF-2000E was used by the UPEO at the beginning of the Intercorporate War. Its use before the Corporate War is unknown, but it has since attained the status of a standard tactical fighter that every UPEO pilot would begin their commission on. However, even though the original Typhoon was considered high-end in the early 21st century, by the mid-21 century that level of performance has become the new plain-vanilla, and the lack of efforts to further modernize the Typhoon II means that it is eventually surpassed by high-maneuverability developments of fighters that, ironically, were first created in a generation prior to that of the Typhoon. Its only known pilots are Erich Jager, Fiona Chris Fitzgerald, and Nemo.

"A multipurpose fighter plane developed by the UPEO-affiliated Joint Military Aircraft Company. It has a large-area delta wing, canards, and a large air intake under the fuselage. Nothing stands out in particular when considering its abilities, and it does not excel in any one thing. Within UPEO's lineup, it is a rather standard aircraft. If anything, it is a well-balanced plane. There is nothing bad about it and it is easy to operate."
― Ace Combat 3: Electrosphere - Namco Official Guide Book

How to Unlock
Available from the start in both versions 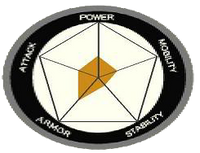