watch 02:45
The Loop (Games)
Do you like this video?
Play Sound
pencil
All right, gentlemen, it's time to clean house!
This article or section may require a cleanup to meet Acepedia's quality standards.

Erich Jager is a pilot in UPEO's Special Armed Response Force. He is the son of Jaeger, an Osean Air Defense Force pilot, and grew up listening to his father's countless stories of his time during the Lighthouse War.[3]

Erich was the son of a pilot in the Osean Air Defense Force's Long Range Strategic Strike Group.[2] He grew up in a middle-class family and was a loved, impatient spoiled child. He had no confidence in himself and after successfully graduating from Oxform University with an International Political Science degree, Erich joined the Universal Peace Enforcement Organization at the suggestion of his parents. He later enrolled into SARF after its formation in 2040. Erich had a significant role in the Intercorporate War.

His first mission was to, along with other SARF squadron pilots, intercept and destroy Neucom transport planes over Expo City. Despite his squadron temporarily losing its leader, they were thrown into battle again to eliminate Neucom's radar site network and secret military bases in Waiapolo.

Participating in most of the major SARF operations, he recommended himself as a good and experienced fighter pilot. However, he doubted UPEO's significance and it's priorities, calling it a "paper tiger".

During the secret mission concerning the escort of UPEO representative Gabriel W. Clarkson above Mt. Lambert, he was one of the pilots who refused to shoot down representative's R-505U when ordered to do so.

He went AWOL along with his whole squadron during an assignment to rendezvous with an allied UI-4053 Sphyrna airborne aircraft carrier, and there is no further information available at the moment. However, it is certain that he was one of the rogue UPEO pilots who attacked and destroyed the UPEO base in Expo City, along with Gilbert Park, UPEO's supreme commander.

Erich in the opening cinematic 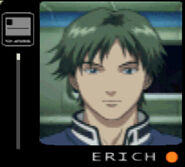 Retrieved from "https://acecombat.fandom.com/wiki/Erich_Jager?oldid=256428"
Community content is available under CC-BY-SA unless otherwise noted.