Erusea, officially the Kingdom of Erusea (エルジア王国),[1] is a large nation located on the westernmost part of the Usean continent. Erusea shares its border with San Salvacion and at least one other nation. Its capital, Farbanti, is located on the coast of Usea's westernmost peninsula near the Spring Sea.

Formerly the Federal Republic of Erusea[2] or Erusean Republic (エルジア共和国),[3][4] the nation is known for its industrialism, militarism, and advancements in engineering and aeronautic technologies. It was severely affected by the impact of Ulysses 1994XF04 in 1999. By mid-2003, tensions between Erusea and the other Usean nations escalated into open war, in which Erusea was soundly defeated.

The nation was restored into a kingdom sometime afterward. Following the construction of the International Space Elevator in Axel Bay, Erusea occupied the space elevator and declared war on the Osean Federation.

Erusea was initially a kingdom ruled by relatives of the D'Elise family. The country has a history of expansionism and frequently annexed several of its smaller neighbors, one of them being the Grand Duchy of Shilage. Despite its annexation, Erusea allowed the Shilage royalty to rule. Eventually, the Erusean royal family was overthrown, and became a federal republic.[5]

Despite the regime change, Erusea did not allow its annexed territories to regain independence and maintained its expansionist policy, later annexing the Republic of Voslage.[6] Sometime in the early 1990s, the military was deployed along the Amber-Ugellas border, which prompted the Federation of Central Usea (FCU) and the IUN to deploy their own forces to the border in response.[7] The standoff continued for a long time until April 29, 1996, when the FCU formally announced the existence of the Ulysses 1994XF04 asteroid, simultaneously pulling out its forces from the Amber-Ugellas border.[7] While no evidence exists, it is believed that Erusea joined international discussions in combating the Ulysses asteroid, and contributed to the construction of Stonehenge.

Despite maintaining hostile relations with its Usean neighbors, Erusea became a member of the Usean Allied Forces,[8] a military alliance aimed to deter Osean and Yuktobanian expansionism from the continent. However, in 1997, a group of southern Usean nations announced their intention to join the Osean Federation. Many northern nations, including Erusea, protested the act. Osea extended its support and prepared to sign the Spring Sea Treaty with the southern nations. On May 30, the day the treaty was to be signed, conservative extremists—including some members of Erusea's military, such as the Albireo Squadron[9]—launched a coup d'état and overwhelmed the Usean Allied Forces across the continent.[8]

Within a year, the rebels had pushed the Allied Forces to the west and controlled most of Erusea's territory, as well as that of every other country.[8] The rebels performed numerous operations within Erusean territory,[10] including taking over The Keep and converting it into a frontline supply base.[11] In March 1998, the Usean Allied Forces hired Scarface Squadron to combat the rebels.[12] Over the next three months, Scarface pushed the frontlines to the center of the Usean continent,[13] eventually restoring Erusea's sovereignty.

Ulysses meteorites began to impact the planet on July 8, 1999, and continued to do so for the next two weeks, killing over 500,000 Useans and crippling the continent's infrastructure.[14] Despite Stonehenge's attempts to defend the continent, at least ten meteorites made impact within Erusea's borders.[15] Two of them made particularly significant craters: Goldberg Crater in the Whiskey Corridor and Ryker Crater in Farbanti, the latter of which flooded the city's western municipal district. Despite the damage, Erusea refused to move its government headquarters or change Farbanti's status as the country's capital.[16]

In the aftermath of the Ulysses disaster, millions of civilians were displaced from their residences and became refugees. Many Usean countries expected Erusea, a large country, to admit the most refugees.[15] In April 2000, after accepting over 200,000 refugees, Erusea's Ministry of Foreign Affairs announced that it would impose restrictions on visa applications, preventing more refugees from entering the country. Despite Erusea's insistence that they could not support any more refugees, other Usean countries publicly condemned the move, boycotting Erusea's products. Many refugees suffered disease and crime at mismanaged refugee camps along Erusea's borders.[15]

The rising tensions from the refugee crisis culminated in Erusea's sudden invasion of San Salvacion and capture of Stonehenge in the summer of 2003.[17] The pilots and security personnel assigned to defend Stonehenge went missing, but Erusea claimed that Stonehenge's management staff was under their protection. The member nations in the Central Usea Treaty Organization heavily condemned Erusea's act, and FCU President Robert Sinclair created the Independent State Allied Forces in the event of war. President Sinclair deployed FCU troops to the outskirts of San Salvacion and ordered Erusea to withdraw within a month.[15]

On September 14, 2003, the deadline that FCU President Sinclair gave Erusea to withdraw, the ISAF attempted to destroy Stonehenge. However, Erusea utilized Stonehenge to great effect in destroying ISAF's aircraft, forcing ISAF to retreat to Los Canas.[17] The ISAF attempted another strike operation to destroy Stonehenge, but Erusea deployed the elite Yellow Squadron, which shot down the entire ISAF strike team.[18] Erusea continued to win numerous victories over ISAF forces, pushing them off the continent onto North Point.[17] Around this time, Erusea was involved in trade deals with Yuktobania and the Republic of Anea, contributing to Erusea's military power.[19]

In the autumn of 2004, ISAF forces began to win multiple small victories over Erusean forces. Erusea initiated preparations to deploy the Aegir Fleet to North Point to end the war, but ISAF forces immobilized and destroyed the fleet in November 2004, providing an opening for ISAF to launch counteroffensive operations.[20]

Erusea began utilizing Stonehenge and Yellow Squadron against the ISAF forces as they penetrated the mainland and liberated Los Canas. In April 2004, the ISAF's Mobius 1 destroyed Stonehenge, eliminating Erusea's air superiority over the Usean continent.[21] Over the next few months, the ISAF launched a massive counteroffensive and pushed the Erusean forces back to its own territory.

Following the liberation of San Salvacion, ISAF chased Erusea's retreating forces, defeating them in the Whiskey Corridor and making a push for Farbanti. On September 19, Mobius 1 assisted ISAF's ground forces in capturing Erusea's GHQ, and shot down the entire Yellow Squadron. Erusea's Supreme Commander was killed in the battle, and Erusea surrendered to ISAF that day.[22] A rebellious group of Erusean officers captured and activated the Megalith superweapon facility in retaliation, but Mobius 1 and other ISAF forces destroyed the facility.[23] Similar remnant Erusean forces continued fighting for at least a month.[24]

In 2006, while the ISAF attempted to implement a new autonomous government within Erusea, a rebellious group calling itself Free Erusea captured ISAF facilities and began terrorist operations across the Usean continent, as far east as Newfield Island. On September 24, 2006, Mobius 1 was deployed to quell the rebellion.[19] In less than three months, Mobius 1 defeated Free Erusea, allowing the ISAF to continue setting up Erusea's provisional government.[25]

On August 21, 2008, the G7 Summit took place aboard the Arkbird. Erusea's provisional government was in attendance on Osea's invitation, in hopes to solve the outstanding issues regarding Erusea's military and the Usean refugees.[26]

In 2019, Erusea captured the International Space Elevator and its Arsenal Birds, viewing its presence in Erusean territory as a flagrant violation of its sovereignty, and declared war on the Osean Federation. During the 2019 conflict with Osea, the International Space Elevator, the Arsenal Birds and their MQ-101 UAVs, gave Erusea power across a large portion of the Usean continent and drove the Osean-led IUN coalition to southeastern Usea. However, despite early gains in the war, Osean counterattacks would result in the loss of northern portions of the nation. Eventually, Osean forces would capture Farbanti, but the anti-satellite attacks conducted by both Osea and Erusea would cut off all communications between their forces. Without any support and blaming each other for the fall of Farbanti, the government collapsed, with pro-peace Conservatives and pro-war Radicals and various independence movements vying for control. Eventually, Osea retook the Space Elevator with the assistance of the Erusean Conservatives, but allowed Princess Rosa to form a provisional government based at the Elevator to help Usean refugees fleeing the continuing civil war.

Outside of wartime holdings, Erusea possesses a large majority of Usea's northwestern territory. Most of Erusea's north and central areas are covered by the Lambert and Amber Mountains, respectively. Situated between the two mountain ranges is the Whiskey Corridor, a strip of desert land that used to have the Irsali River flowing through it. Goldberg Crater, the largest of the Ulysses craters, is located next to the dried-up river.[16]

Erusea's capital city, Farbanti, is partially constructed by man-made landfills.[22] Its westernmost district was flooded by the Ulysses meteorite that created Ryker Crater.[16] Erusea's territory also includes Cape Rainy to the north, the strategic port city Anchorhead to the south, and the Twinkle Islands south of Farbanti.

The Gunther region belonged to Erusea but had to be relinquished as a trust territory to the IUN after the Continental War.[29]

Erusea was first structured as a kingdom. The monarchy was later overthrown and became a federal republic by the 1990s.[5] The republic was led by a military Supreme Commander,[22] who held the most sway in government proceedings, but Erusea still maintained a parliament for legislative duties.[30] The republic's political environment was described as fascist by the Side Story Narrator and ISAF forces, although their statements were biased in nature.[31]

By the 2010s, Erusea reformed back into a kingdom during its period of reconstruction. Princess Rosa Cossette D'Elise and her family, despite being viewed as commoners, ascended to the throne by blood relation to the former monarchy.[27]

Erusea boasted a powerful military in the 1990s and early 2000s, described as equivalent to the military power of all of ISAF's member states combined.[15] Military service is mandatory for its citizens.[32] Its air force played host to many ace pilots, including Edgar Grint[9] and Yellow 13.[33] The Erusean navy was best represented by the Aegir Fleet, repeatedly described as the "invincible fleet" prior to its sinking.[20] Erusea continued to maintain some naval power afterward,[22] but its strength post-2005 is unknown. The Erusean military also appears to have a tactical espionage branch, whose operatives were responsible for disabling ISAF's early warning radar network during the Continental War and the elimination of an Osean survey team during the Lighthouse War.

The height of Erusea's military power came with its capture of Stonehenge in 2003. While in control of the facility, Erusea shot down innumerable ISAF aircraft, preventing the ISAF from providing air support to its ground troops.[34] Stonehenge's destruction proved to be a crippling blow to the Erusean military.[21]

Erusea's Air and Space Administration (EASA) is recognized as a major scientific element of Erusea's military. The EASA attempted to manufacture the X-02 Wyvern before the conclusion of the Continental War, but political disagreements and wartime supply exhaustion prevented its completion before the war's close.[30] In later years, the EASA would continue to be a major part of Erusean military development, performing research into UAV technology.

During the 2019 conflict with Osea, Erusea captured the International Space Elevator, the Arsenal Birds and their MQ-101 UAVs, giving Erusea power across a large portion of the Usean continent. However, despite early gains in the war, Osean counterattacks would result in the loss of northern portions of the nation. Eventually, Osean forces would capture Farbanti, but the anti-satellite attacks conducted by both Osea and Erusea would cut off all communications between their forces. Without any support and blaming each other for the fall of Farbanti, the government collapsed, with pro-peace Conservatives and pro-war Radicals and various independence movements vying for control. Eventually, Osea retook the Space Elevator, but allowed Princess Rosa to form a provisional government based at the Elevator to help Usean refugees fleeing the continuing civil war. 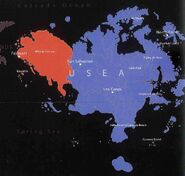 Erusean territories prior to the Continental War as depicted in Aces At War: A History 2019 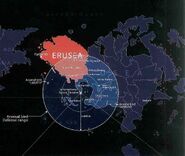 Erusean territories in early 2019
Add a photo to this gallery