View source
watch 02:30
Dead Cells Final DLC - The Loop
Do you like this video?
Play Sound

is a special version of the F-117A Nighthawk featuring the character Yukiho Hagiwara from THE iDOLM@STER. It was featured as a downloadable aircraft skin in Ace Combat 6: Fires of Liberation and Ace Combat: Assault Horizon, and was available as a standalone Special Aircraft in Ace Combat Infinity. 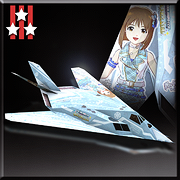 "A special version of the F-117A featuring the same color scheme as Yukiho Hagiwara from THE IDOLM@STER series.
Its abilities may seem ordinary at first sight, but you may be able to unleash its strengths the more you use it."
― Hangar

Nickname
Upgrading this aircraft to Level 20 unlocked the Anohi No Namida nickname for use at any time.

"THE IDOLMASTER, Yukiho Hagiwara Aircraft. A little on the shy side, this boasts impressive moves when trying its best. It's up to you to make this star shine!"
― Official description

The F-117A Nighthawk -THE iDOLM@STER: Yukiho- is a DLC aircraft available in Ace Combat 6: Fires of Liberation. Priced at $4.99 in XBL Marketplace and is part of Pack #03, this F-117A Nighthawk is the second aircraft in the THE iDOLM@STER aircraft series. This Nighthawk is outfitted with a light blue design based on idol Yukiho Hagiwara, a very shy girl who wants to become a singer to leave her cowardly disposition behind. Unlike the other iDOLM@STER aircraft, Yukiho's Nighthawk does not feature a different color smoke for missile trails, but this is likely due to the design being too close to the default white.

The Yukiho Nighthawk, performance-wise, sees a maxed out air-to-ground rating as well as a needed increase in the air-to-air rating. Ammo count sees a massive increase, too, with the QAAM and the LASM being the most noticable; compared to the original Nighthawk, with 15 QAAMs and 35 LASMs, the Yukiho Nighthawk has a massive 55 QAAMs and 81 LASMs. This makes this aircraft more potent in air-to-air battles as well as for ground-based fighting.

There are, however, some potent weaknesses associated with this skin. Defense, mobility and speed see a decrease, making it not only slower than the original Nighthawk and the other non-DLC attacker aircraft, but also making it the slowest aircraft in the game. Also, stability sees a decrease, making it somewhat harder to perform High-G turns. These drawbacks allude to Yukiho's shy personality. However, once the player does get the Nighthawk to a higher speed, the aircraft's mobility increases; this alludes to Yukiho's personality shifting when she performs on stage. As such, at higher speeds the Nighthawk becomes a capable multirole aircraft.

Overall, despite some decreases to stats, this is superior to the original not only in terms of ammo count, but in the mobility increase as it goes faster. This also makes it a great choice for multiplayer battles, and for going for the Night Owl medal, like with the other attacker aircraft DLC.