[Back Again!] PRIDE OF WARDOG

is a modified version of the F-14A Tomcat with the Wardog Squadron paint scheme and Kei Nagase's aircraft number. It is only available as a Special Aircraft in Ace Combat Infinity. 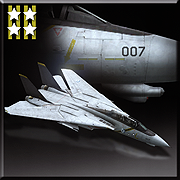 "A special version of the F-14A that resembles the second aircraft from a famous tactical fighter squadron. Featuring high-level enhancements made specifically for a unit of ace pilots, its turning performance has been further enhanced to support pilots skilled at aerial suppression. The pilot of the original aircraft is said to have been a tough-as-nails lady, with such incredible piloting skills that it was impossible to tell what she was going to do next. After suffering the pain of losing the captain's aircraft of her squadron, she vowed to never let such a tragedy happen again, flying through to the end of the war as the squadron's second aircraft."
― Hangar

The aircraft was only available to the top 200 players in the "[Back Again!] Pride of Wardog" Online Co-Op Missions Ranking Tournament in September 2015

Nickname
Upgrading this aircraft to Level 20 unlocked the Princess of the Frozen Land nickname for use at any time.

Retrieved from "https://acecombat.fandom.com/wiki/F-14A_-Edge-?oldid=224018"
Community content is available under CC-BY-SA unless otherwise noted.