[Back Again!] THE UNSUNG WAR

) is a modified version of the F-14A Tomcat with the Razgriz Squadron paint scheme and Blaze's aircraft number. It only appears in Ace Combat Infinity as a Special Aircraft.

"A special version of the F-14A based on the first aircraft from an off-the-books special operations squadron.
Although there is a witness testimony attesting to the involvement of the squadron in multiple operations, confirming their existence, it has never been officially acknowledged by the military. This aircraft is an attempt to recreate the aircraft from this phantom squadron using collected images and data.
Highly tuned to meet the requirements of pilots from such a special unit, it now has capabilities suited to a captain's aircraft, leading his wingmen into battle with excellent acceleration, turning and overall durability.
There is a popular theory stating that members of "Wardog," a squadron that was apparently wiped out during a certain incident, actually formed the core of this off-the-books squadron. However, the only way to know the truth is to wait for the declassification of related confidential materials in 10 years time.
"Razgriz shall appear at the turning points in history.""
― Hangar

The aircraft was only available as a reward in "The Unsung War" Online Co-Op Missions Ranking Tournament in early February 2015.

Nickname
Upgrading this aircraft to Level 20 unlocked the Hero, Devil and Ghost nickname for use at any time. 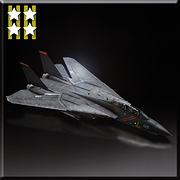 Retrieved from "https://acecombat.fandom.com/wiki/F-14A_-R1_Blaze-?oldid=224020"
Community content is available under CC-BY-SA unless otherwise noted.