The F-14A Tomcat is a twin engine, two-seat, variable geometry carrier-based fighter aircraft. It has been featured in multiple Ace Combat games, and has since been superseded by the F-14D Super Tomcat in newer titles.

The F-14A was employed by the naval aviation wing of various armed forces in the Strangereal world, along with the F-14B Bombcat and the advanced F-14D Super Tomcat.

Tomcats were operated by the Scarface Squadron and enemy forces during the 1995 insurrection in the Skully Islands.[1]

During the Continental War, the F-14A was operated by Erusea and certain member-states of the ISAF's Navy. A particular operator of the aircraft was the Mobius Squadron, which employed such jets in carrier operations through the course of the war.[2]

F-14As were operated by the Yuktobanian Navy and the Osean Maritime Defense Force, and were commonly deployed during the attacks on Osea and the invasion of Yuktobania in the Circum-Pacific War. Various squadrons operating from aircraft carriers as the OFS Kestrel, including Marcus Snow's VFA-206 launched in defensive missions during the attack on Port St. Hewlett and the maritime retreat to the Eaglin Straits, where many of them were destroyed by the Scinfaxi's ballistic missile attack.[3]

Yuktobanian Tomcats were among the escorts of the cargo aircraft involved in the exodus from southern Yuktobania after the seizure of the Bastok Peninsula. Towards the end of the conflict, abandoned F-14As from the Kestrel's deceased flight crews were obtained by the Wardog Squadron, becoming their flagship aircraft as the Razgriz Squadron during their campaign against the Grey Men.[3]

In the Ace Combat Infinity universe, the F-14A Tomcat design was acquired by Wernher and Noah Enterprises following the Ulysses Disaster and was later mass-produced by the company's Advanced Automated Aviation Plant systems along with the advanced Super Tomcat. The model produced by the company was a hybridized model with Super Tomcat features, adopting the AN/AAS-42 IRST pod and the AAX-1 TV tracking system - never used by actual -A models - while omitting the supersonic glove vanes of early-model aircraft.

"A large, carrier-based fighter intended to take over from the F-4 as principle fleet air defense. It has variable wings that can automatically change angle even during flight, allowing for both high speed capabilities in high speed ranges and high maneuverability in low speed ranges. It is also equipped with long range missiles that can shoot down incoming enemies over a considerable distance. Known as the "Tomcat"."
― Hangar

A Tomcat over Tokyo

The Tomcat shooting down an aircraft over Comona Base

The Tomcat chasing down a Searcher

A F-14A in Yuktobanian colors

Official artwork of the F-14. Note the "118" on the side, implying that this Tomcat belongs to Mobius 1

Rear of the aircraft in hangar

The aircraft is displayed as F-14. 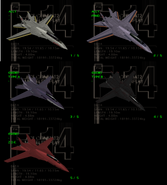 The aircraft is displayed as F-14.

EASY
Available at the start of the game

NORMAL
Available at the start of the game

The F-14 in the Hangar screen 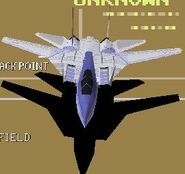 Retrieved from "https://acecombat.fandom.com/wiki/F-14A_Tomcat?oldid=250837"
Community content is available under CC-BY-SA unless otherwise noted.