is a modified version of the F-14D Super Tomcat featuring the livery of the United States Navy Strike Fighter Squadron 103, nicknamed the "Jolly Rogers". Their livery was also made available on the F/A-18F -Jolly Rogers-

This livery was available as a DLC skin for Ace Combat: Assault Horizon, and later appeared in Ace Combat Infinity as a Special Aircraft. 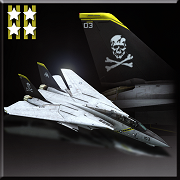 "A special version of the F-14D featuring the skull-and-crossbone insignia used by U.S. Navy Strike Fighter Squadron (VF-103). Renown by its high performance capabilities this variable-sweep wing fighter will challenge the skills of the most worthy pilot.
Having prevailed against the seven seas, the pirates now seek to rule the skies.
*"Jolly Roger" logo and aircraft paint pattern used with permission of the United States Department of Defense."
― Hangar

The aircraft was only available as a Limited-Time Drop between December 4 and December 31 of 2014.

Retrieved from "https://acecombat.fandom.com/wiki/F-14D_-Jolly_Rogers-?oldid=231323"
Community content is available under CC-BY-SA unless otherwise noted.