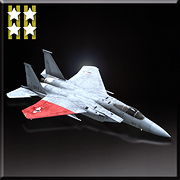 "A special version of the F-15C which resembles the aircraft flown by the legendary ace pilot known as "Pixy". In order for it to survive even the harshest of battles, major enhancements have been made to increase its durability and stability. Pixy survived and returned from battle even after losing a wing. Feeling proud of his achievement, one of his aircraft wings was colored red to represent the lost wing. People on the battlefield often joke about Pixy and say that his experience is comparable to surviving a nuclear blast."
― Hangar

The aircraft was available during a Limited-Time Drop event in September 2014.

Nickname
Upgrading this aircraft to Level 20 unlocked the Buddy nickname for use at any time.

Comparison between the cockpits in Default skin and Event Skin #01

Retrieved from "https://acecombat.fandom.com/wiki/F-15C_-Pixy-?oldid=253076"
Community content is available under CC-BY-SA unless otherwise noted.