is a special version of the F-15E Strike Eagle featuring the character Chihaya Kisaragi from THE iDOLM@STER. It was featured as a downloadable aircraft skin in Ace Combat 6: Fires of Liberation and Ace Combat: Assault Horizon, and was available as a standalone Special Aircraft in Ace Combat Infinity. 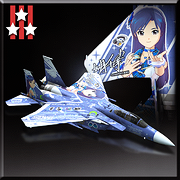 "A special version of the F-15E featuring the same color scheme as Chihaya Kisaragi from THE IDOLM@STER series.
It requires great pilot skills to control when sustaining damage, but its abilities are unquestionable.
The sky has no limits. Keep reaching for the top!"
― Hangar

Nickname
Upgrading this aircraft to Level 20 unlocked the Saihyo nickname for use at any time.

In Ace Combat: Assault Horizon, the F-15E "THE IDOLM@STER" is the first downloadable Strike Eagle variant. It was released in November 29, 2011 with PACK 05, costing 400 MSP in Xbox Live and $4.99 USD in the PlayStation Store. It is one of the three iM@S aircraft released for the game, accompanied by the Su-33 -THE IDOLMASTER MIKI- and the F-22A -THE IDOLMASTER HARUKA-. All three aircraft can be downloaded in a single bundle worth $9.99 or 400 MSP.

There are two Chihaya paint schemes available: the basic version and a low visibility, "monotone" version. Unlike its Fires of Liberation precursor, the aircraft is merely a paint scheme, and does not affect performance in any way.

"While a little hard to handle when it’s in a bad mood, this plane’s talent is undeniable. Keep your head up, spread your wings and take to the skies!"
― Official description

The F-15E iDOLM@STER is the fourth aircraft of the iDOLM@STER aircraft line. It was released in the XBL Marketplace in February 27, 2008 with PACK 05, at the price of $4.99 (400 MSP, pre-MSP retirement). As implied, it is themed on iM@S character Chihaya Kisaragi. The aircraft is adorned with a blue paint job with white stripes, while Kisaragi's likeness is emblazoned in the left side of the plane, while the "PROJECT iM@S" logo is featured in the right wing.

In performance, the aircraft boasts a minor yet general statistics upgrade in comparison to the basic F-15E Strike Eagle. In exchange for the upgrade, however, the plane's armor is stripped down, thus reducing its survivability in the battlefield. Furthermore, the aircraft suffers from a unique flaw in that taking any damage will cause an immediate nosedive; this alludes to the fan-named "Chihaya Spiral" from the original iDOLM@STER arcade game, where Chihaya's mood was very unstable. This aspect of the aircraft makes low-altitude flight extremely risky; players should remain at higher altitudes to avoid crashing into the ground when taking damage.

The Strike Eagle's missile, XAGM and Unguided Bomb capacity have been reduced, while that of the XMA6 and Self-Forging Fragment Submunitions weapons has been raised.