is a modified version of the F-15E Strike Eagle with a special skin featuring the livery of Marcus Lampert, the second pilot of the protagonist squadron Garuda Team. It only appears in Ace Combat Infinity as a Special Aircraft. 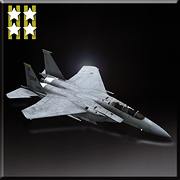 "A special version of the F-15E based on the second aircraft from the "Garuda Squadron" that was used to resist the invasion of a military nation and liberate their ancestral homeland. As the war took place across the entire continent, the aircraft was tuned for overall performance in order to be able to handle all types of missions. Highly stable controls allow for extremely precise flying. The epic tales of the pilot who not only fought bravely in many battles, but also struggled long and hard for the sake of his beloved family have since been shared and enjoyed by many people."
― Hangar

This aircraft was only available to the top 200 players in the "[Back Again!] Fires of Liberation" Online Co-Op Missions Ranking Tournament in late September 2015 to early October 2015

Nickname
Upgrading this aircraft to Level 20 unlocked the Angel Witness nickname for use at any time.

Retrieved from "https://acecombat.fandom.com/wiki/F-15E_-Shamrock-?oldid=217938"
Community content is available under CC-BY-SA unless otherwise noted.