is a modified version of the F-15J with a tiger skin. It only appears in Ace Combat Infinity as a Special Aircraft. 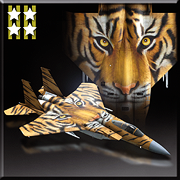 "A special version of the F-15J featuring the face of a ferocious tiger.
It maintains its high speed performance, but features improved acceleration and air-to-air attack capabilities. Like a wild tiger hunting its prey, enemies will tremble in fear at the mere sight of this aircraft."
― Hangar

The aircraft was available during a Limited-Time Drop event in November 2014.
It was later available through the Special Supply Items Catalogue for 400 tickets from September 1st to November 30th

Nickname
Upgrading this aircraft to Level 20 unlocked the Tiger of the Yamato nickname for use at any time.

Retrieved from "https://acecombat.fandom.com/wiki/F-15J_-Tiger-?oldid=216297"
Community content is available under CC-BY-SA unless otherwise noted.