Ace Combat 2
The F-15S is a fictional aircraft that resembles the F-15 S/MTD. It only appears in Ace Combat 2.

In Ace Combat 2, an F-15S under the control of Zone of Endless fought against Phoenix over Saint Ark when the Usean coup d'état was drawing to a close. The Usean Rebel Forces also fielded the F-15S in their final stand against the Usean Allied Forces at Fortress Intolerance. The F-15S did not appear in Ace Combat: Assault Horizon Legacy, but its role in Saint Ark was substituted by the F-15 S/MTD.

"An F-15 with thrust deflection nozzles and canard wings, used as a testing machine for air combat maneuverability research. Because it proved itself extraordinary during tests, it was chosen to be deployed in actual combat."
― NamCollection description 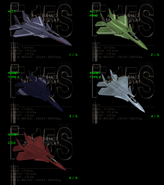 Color schemes of the F-15S in the Model Viewer

Retrieved from "https://acecombat.fandom.com/wiki/F-15S?oldid=260203"
Community content is available under CC-BY-SA unless otherwise noted.