is a modified version of the F-15 S/MTD based on the F-15 ACTIVE test aircraft. It appears in Ace Combat Infinity as a Special Aircraft. 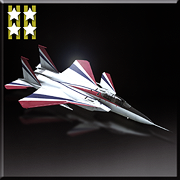 "A special version of the F-15 S/MTD featuring three vivid stripes. Its excellent throttle capabilities and turning performance have been adjusted. Equipped weapons have also been changed to further improve its aerial combat capabilities. Even though it features the same color as many prototype aircraft, its excellent capabilities on the battlefield are not to be underestimated."
― Hangar

The aircraft was only available as a Team Deathmatch Ranking Tournament reward in late July 2014.

Nickname
Upgrading this aircraft to Level 20 unlocked the Star Rainbow nickname for use at any time.

Retrieved from "https://acecombat.fandom.com/wiki/F-15_S/MTD_-Stripes-?oldid=194843"
Community content is available under CC-BY-SA unless otherwise noted.