[Back Again!] The First Team Deathmatch!

is a special version of the F-16C Fighting Falcon featuring the livery of Patrick James Beckett and emblem of Crow Team. It was available for a limited time as Downloadable Content in Ace Combat 6: Fires of Liberation, and was later added as a Special Aircraft in Ace Combat Infinity. 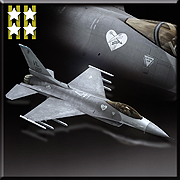 "A special version of the F-16C based on the aircraft from the wingman of a renowned ace pilot.
It has been tuned with an emphasis on turning performance in order to keep up with the sharp flying of the lead aircraft.
The pilot of the original aircraft was catapulted by a chance meeting from his humdrum everyday existence into a struggle of life and death. Driven by his ideals for peace, he flew across the skies of the world."
― Hangar

This aircraft was available for the top 200 participants in a Team Deathmatch Ranking Tournament in July 2015.

Nickname
Upgrading this aircraft to Level 20 unlocked the Idealist nickname for use at any time.

For more information, see F-16C Fighting Falcon.
This DLC is no longer available.

"Ace Combat: The Belkan War, wingman PJ Aircraft. Increased maneuverability is attained via reductions in armor. A thorough set of customizations enable this aircraft to adapt quickly to changes in the tide of battle. Initially a member of the Ustio Air Force's Crow Squadron, PJ flew as Galm 2 during the Belkan residual force sweeping operation, Stone Age. Fighting to protect the one he loved, PJ's sense of justice remained steadfast to the end."
― Hangar

PJ's skin for the F-16C provides a minor upgrade to some of the aircraft's statistics. Air-to-air and air-to-ground are slightly increased, resulting in a lower lock-on time for both types of targets. The aircraft's defense is lowered, which is counter-balanced by a higher mobility. Speed and stability remain the same.