The Patriot was initially available as a DLC skin for Ace Combat: Assault Horizon, with free codes distributed by GameSpot for both PS3 and Xbox 360 from November 15 to December 31, 2011.[1][2] It was later made available to purchase by anyone who did not get a code. The aircraft also later appeared in Ace Combat Infinity as a Special Aircraft. 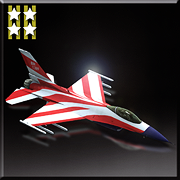 "A special version of the F-16C featuring the red, white and blue colors of the United States national flag. The Fighting Falcon's extraordinary combat capabilities make it a formidable opponent in any battle.
A symbol of freedom, truth and justice the pilots of this aircraft will use their skill and courage to determine their fate.
*Skin developed by BANDAI NAMCO and approved for use by the United States Department of Defense."
― Hangar

The aircraft was only available as an Online Co-Op Missions Ranking Tournament reward in early December 2014.

Nickname
Upgrading this aircraft to Level 20 unlocked the Free Dreamer nickname for use at any time.

Retrieved from "https://acecombat.fandom.com/wiki/F-16C_-Patriot-?oldid=224049"
Community content is available under CC-BY-SA unless otherwise noted.