The F-16XL is an Attacker variant of the F-16C Fighting Falcon. It features a cranked-arrow delta wing design, and can engage ground targets with speed and power, typically at a cost to its mobility.

The F-16XL was operated primarily by the Belkan Air Force during the Belkan War. It was also flown by the paramilitary terrorist organization A World With No Boundaries in limited numbers. The (former) OADF Wizard Squadron used F-16XLs in conjunction with YF-23As.[1] Other notable pilots who flew this aircraft were Belkan aces Elmar Hahn, callsign Amsel,[2] and Thomas Hein, callsign Dichter.[3]

During the Circum-Pacific War, the Yuktobanian Air Force used F-16XLs against Osea's 1st Tank Battalion as they advanced in Operation Desert Arrow.[4]

During the Aurelian War, F-16XLs were used by the Leasath Air Force during the war's middle stages.[5]

Antares Squadron had access to the aircraft during the Valahia Crisis.[6]

F-16XLs were available to UNF pilots during Operation Eternal Liberation.[7]

"A heavily modified version of the F-16.
The main wing has been changed to a cranked-arrow delta wing and it has the largest weapon carrying capacity among the F-16 aircraft. It features improved stability in low speed ranges and its abilities as both an attacker and a bomber have also been improved. The aircraft competed with the F-15E in the Enhanced Tactical Fighter (ETF), a programme that was conducted by the United States Air force. Unfortunately, the aircraft was not adopted and is now used as a subject of flight research in research institutions."
― Hangar

This aircraft can be unlocked via the Aircraft Tree.

Three-tone desert camouflage; based on the F-16XA Sakerfalcon from Ace Combat 3: Electrosphere

"This aircraft boasts excellent acceleration and control at low speeds, as well as a large weapons payload"
― Hangar 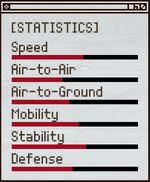 "This aircraft boasts excellent acceleration and control at low speeds, as well as a large weapons payload"
― Hangar

Complete mission 16: The Demon of the Round Table on Knight Ace Style, and defeat the Wizard Squadron. It costs 81,000 credits to purchase.

An F-16XL in Osean colors

Retrieved from "https://acecombat.fandom.com/wiki/F-16XL?oldid=261068"
Community content is available under CC-BY-SA unless otherwise noted.