It's time to decide who flies, and who falls from grace.

is a modified version of the F-22A Raptor with a special skin featuring the livery of Antares Squadron. It only appears in Ace Combat Infinity as a Special Aircraft. 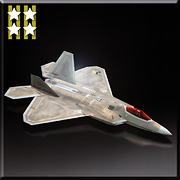 "A special version of the F-22A featuring the design of M42 Antares Squadron that is affiliated with the private military company, "Martinez Security."
It has undergone major improvements, resulting in a an aircraft that may be able to outperform 5th generation aircraft.
Pilots that have experienced countless battles may get the chance to witness the bravery of a legendary pilot that saved major cities from the clutches of the enemy."
― Hangar

The F-22A -Antares- was available as a reward for the top 200 players in the "It's time to decide who flies, and who falls from grace" Naval Fleet Assault Ranking Tournament in mid-February 2015.
The aircraft was later made available in the Skilled Pilot Medal exchange program. Players can exchange 100 medals to acquire the aircraft.

Nickname
Upgrading this aircraft to Level 20 unlocked the Fight Together As One nickname for use at any time.

The front of the -Antares-

Retrieved from "https://acecombat.fandom.com/wiki/F-22A_-Antares-?oldid=224058"
Community content is available under CC-BY-SA unless otherwise noted.