is a modified version of the F-22A Raptor with a special skin featuring the livery of Gryphus One. It was available for a limited time as Downloadable Content in Ace Combat 6: Fires of Liberation, and was later added as a Special Aircraft in Ace Combat Infinity. 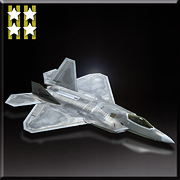 "A special version of the F-22 featuring the Southern Cross emblem belonging to Gryphus Squadron.
Aircraft stability, defense, and speed performance have been improved, resulting in an aircraft that is equipped to deal with all types of battle situations.
Featuring the color design of a squadron that was active in a small country within the Southern hemisphere, it is said that the glow of the Southern Cross has the ability to change the tide of battle."
― Hangar

The aircraft was available as a reward for the top 200 players in "Nemesis is Here!" Online Co-Op Missions Ranking Tournament in late March 2015.
The aircraft was later made available in the Skilled Pilot Medal exchange program. Players can exchange 100 medals to acquire the aircraft.

Nickname
Upgrading this aircraft to Level 20 unlocked the Gold Star of Victory nickname for use at any time.

In its test flight. The Gray canopy and Gryphus' low-vis emblem on the vertical stabilizers can be seen in this photo.

For more information, see F-22A Raptor.
This DLC is no longer available.

"The heroes of Ace Combat X, Gryphus Squadron Aircraft. Mobility and speed have been exchanged for heavy armour and increased anti-personnel weapon's payload for an assault on the Leasath high-security military compound, the Archelon Fortress. Its peace shattered, and its armed forces smashed by the sudden Leasath assault, Aurelia places its fate in the hands of the Gryphus Squadron. The actions of their captain and the emblem he bore would earn him the title of Nemesis."
― Hangar[3]

Retrieved from "https://acecombat.fandom.com/wiki/F-22A_-Gryphus-?oldid=244273"
Community content is available under CC-BY-SA unless otherwise noted.