A squadron flying in multiplayer

I don't care if it's a lie. Just tell them Mobius 1 is already here!

"A special version of the F-22A which resembles the aircraft flown by an ace pilot who made a major contribution in a battle against a large nation. It features many performance upgrades designed to create an aircraft that can do the work of an entire squadron. As a result of these upgrades, the aircraft has excellent air combat abilities. However, it requires precise piloting skills to control it effectively. An engineer who helped with the aircraft's adjustments had the opportunity to check the original aircraft flown by the ace pilot. Based on his findings, the engineer concluded that the aircraft fully utilized the latest technology from its time, but he was surprised at how an ordinary F-22A was able to achieve such feats in battle."
― Hangar

Nickname
Upgrading this aircraft to Level 20 unlocked the The Sky is for Everyone nickname for use at any time. 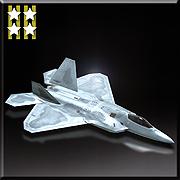 Speed, mobility and air-to-air have been upgraded to their max, while air-to-ground and stability receive a minor yet important boost. On the other hand, the plane has been virtually stripped of all armor, making it a very hazardous aircraft to fly for inexperienced pilots.

Flyby
Add a photo to this gallery