is a Special Aircraft variant of the F-22A Raptor featuring the livery of Mobius 2 of Mobius Squadron. It was available in Ace Combat Infinity as a Ranking Tournament reward. 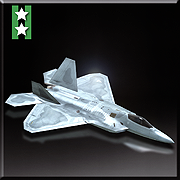 "An F-22A special aircraft based on the second aircraft from the 118th Tactical Fighter Wing "Mobius Squadron".
An aircraft with excellent capabilities in all areas, it flew alongside the first aircraft in a range of battles without ever being shot down.
The pilot of the original aircraft was perhaps, if just the numerical records are considered, somewhat average when compared to the pilot of the first aircraft. The second aircraft pilot was still exceptionally talented, fighting enemy ace units many times and successfully completing many difficult missions without ever being shot down once."
― Hangar

Nickname
Upgrading this aircraft to Level 20 unlocked the Witness of History nickname for use at any time.

Retrieved from "https://acecombat.fandom.com/wiki/F-22A_-Mobius2-?oldid=224063"
Community content is available under CC-BY-SA unless otherwise noted.