is a Special Aircraft variant of the F-22A Raptor in Ace Combat Infinity based on the main player character Reaper. 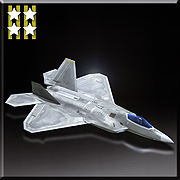 "A special version of the F-22A which was created by Arrows Air Defense and Security for exceptionally skilled and diligent pilots. It features excellent durability allowing it to survive the harshest of conditions during battle. In order for the aircraft to destroy high value targets ahead of its rivals, adjustments have been made with a focus on improving speed performance. The Reaper is known for gathering the souls of fallen pilots on the battlefield."
― Hangar

This aircraft was only available in the "ACE COMBAT 20th Anniversary" Ranking Tournament in early July 2015.

Nickname
Upgrading this aircraft to Level 20 unlocked the Master of the Infinite Sky nickname for use at any time.

Retrieved from "https://acecombat.fandom.com/wiki/F-22A_-Reaper-?oldid=218072"
Community content is available under CC-BY-SA unless otherwise noted.