is a Special Aircraft variant of the F-22A Raptor featuring the livery of the same aircraft used by Scarface 1. 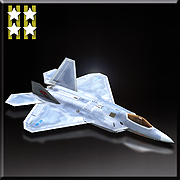 "A special version of the F-22A based on the 1st aircraft from the Special Tactical Fighter Squadron, "Scarface". It has excellent turning and strong attacking capabilities. Its minimal turn radius is so small it made witnesses say "the 180 didn't look like a U, it looked like an I". Even during this famous pilot's active duty days, he had many stories to tell. Though he left his squadron while still young, he was recruited again by the brass as the world changed. He returned to achieve what no normal pilot could, overcoming difficult campaigns time and time again, adding another page to his book of legendary feats."
― Hangar

Nickname
Upgrading this aircraft to Level 20 unlocked the Successor nickname for use at any time.

Retrieved from "https://acecombat.fandom.com/wiki/F-22A_-Scarface1-?oldid=224066"
Community content is available under CC-BY-SA unless otherwise noted.