Start a Wiki
watch 01:51
The Loop (Games)
Do you like this video?
footnote
This article or section needs additional citations for verification.
Please help improve this article by adding citations to reliable sources.
Unsourced material may be challenged and removed.

The F-22C Raptor II (F-22C ラプターⅡ) is an upgraded variant of the F-22A Raptor manufactured by General Resource Limited. It features a Connection For Flight Interface and improved stability over its predecessor. General Resource Defense Force pilots commonly fly the F-22C, including ace pilot Abyssal Dision.

Like most General Resource aircraft, the F-22C is very similar to the F-22A. Its glass canopy is removed and the aircraft is entirely enclosed to support the COFFIN interface. General Resource also reinstalled the airbrakes featured on the YF-22 Lightning II that were removed from the F-22A to lower its production costs. This move increased the F-22C's stability.[1]

Abyssal Dision flew a special F-22C Raptor-D.[citation needed] This version of the aircraft featured a special black livery similar to his F-15S/MT Eagle+.

The F-22C's specifications are as follows:[1]

General Resource developed the F-22C some time prior to the Intercorporate War. Abyssal Dision first used the aircraft in the war during GRDF's air raid against Neucom Incorporated's air base in the Waiapolo Mountains.[2][3] Dision used it from this point until General Resource's attack on Petrol Coast,[4] after which he flew the UI-4054 Aurora.

"The F-22 was developed as a high performance fighter, able to cruise supersonically without afterburner but also dogfight in close combat with the highest level of maneuverability. The A model F-22 lacked a dedicated airbrake to keep down costs, but in order to further increase maneuverability when dogfighting, it was re-equipped on the C model."
― Ace Combat 3: Electrosphere - Namco Official Guide Book

"The F-22, which was developed as a next-generation fighter to replace the F-15, improved stealth performance by utilizing a diamond cross-section, and it could achieve supercruise (supersonic flight) without afterburners. Thus, the F-22 demonstrated excellent performance as both a stealth aircraft and an air superiority fighter. The F-22C aimed at further improving air combat capability by reinstalling airbrakes that were removed from the F-22 to reduce costs for mass production. As a result, this aircraft features the highest stability of all currently-deployed fighter planes."
― Ace Combat 3: Electrosphere - Mission & World View Guide Book[1] 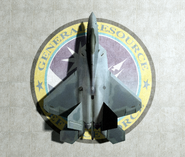 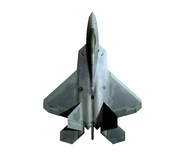 A Raptor II over Expo City

Right side view
Add a photo to this gallery

Retrieved from "https://acecombat.fandom.com/wiki/F-22C_Raptor_II?oldid=252492"
Community content is available under CC-BY-SA unless otherwise noted.