is a modified version of the F-2A to commemorate the 60th anniversary of the Japan Air Self-Defense Force. It only appears in Ace Combat Infinity as a Special Aircraft. 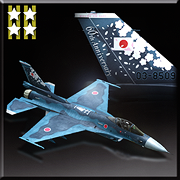 The aircraft was only available as a reward in "Japan Air Self-Defense Force" Online Co-Op Missions Ranking Tournament in early February 2015.

Nickname
Upgrading this aircraft to Level 20 unlocked the Crimson Line nickname for use at any time.

Retrieved from "https://acecombat.fandom.com/wiki/F-2A_-60th_Anniversary-?oldid=224069"
Community content is available under CC-BY-SA unless otherwise noted.