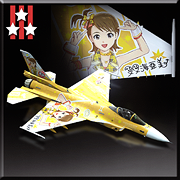 "A special version of the F-2A featuring the same color scheme as Ami Futami from THE IDOLM@STER series. This attacker shows its distinctive qualities with its cute appearance. You may be able to unlock Ami's full potential if you can keep her interested in battle."
― Hangar

Nickname
Upgrading this aircraft to Level 20 unlocked the Triple Angel nickname for use at any time.

Retrieved from "https://acecombat.fandom.com/wiki/F-2A_-AMI-?oldid=224070"
Community content is available under CC-BY-SA unless otherwise noted.