is a modified version of the F-2A featuring a white and red livery based on the XF-2A paint scheme. It appears in Ace Combat Infinity as a Special Aircraft. 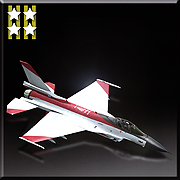 "An F-2A special aircraft based on the first aircraft in a line of prototypes. Although not directly related to the coloring, it is a prototype with an enhanced engine and capacity for high speed flight. As it is tuned for high speed flight, it faces some issues in regard to acceleration and speed reduction rate, but regular aircraft cannot compete with its top speed."
― Hangar

The aircraft was available to the top 1,000 players in the "Ring Domination" Team Deathmatch Ranking Tournament in early February 2016 as well as 10 other players who landed on lucky numbers.

It was then added to the Skilled Pilot Medal Exchange on February 15, 2017. Players can acquire the aircraft for

Nickname
Upgrading this aircraft to Level 20 unlocked the High Speed Charge nickname for use at any time.

Retrieved from "https://acecombat.fandom.com/wiki/F-2A_-Experimental-?oldid=266197"
Community content is available under CC-BY-SA unless otherwise noted.