View source
watch 04:03
Wiki Targeted (Games)
Do you like this video?
Play Sound

is a modified version of the F-2A featuring a 19th Task Force livery from Ace Combat: Ikaros in the Sky. It was available as a DLC skin in Ace Combat: Assault Horizon and later appeared in Ace Combat Infinity as a Special Aircraft. 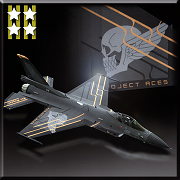 "A special version of the F-2A based on Project Nagase.
As portrayed by its wings and body frame, this is a powerful attacker that can initiate lethal air-to-ground attacks.
"I won't allow you to shoot down the lead aircraft". These words from Nagase continue to echo through the aircraft regardless of the combat situation it is faced with."
― Hangar

The aircraft was only available during a Limited-Time Drop event in January 2015.