is a modified version of the F-35B Lightning II featuring a Taurus theme. It appears in Ace Combat Infinity as a Special Aircraft. 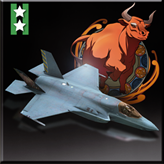 "A special version of the F-35B featuring a Taurus theme.
It features improved stability and an abundance of ordnance loaded on board.
This courageous bull will not show any mercy on its enemies."
― Hangar

The aircraft was only available during a Limited-Time Drop event in May 2015.

Nickname
Upgrading this aircraft to Level 20 unlocked the White Ram nickname for use at any time.

Banner advertising the aircraft and the ADF-01 -Osea-

Retrieved from "https://acecombat.fandom.com/wiki/F-35B_-Taurus-?oldid=218017"
Community content is available under CC-BY-SA unless otherwise noted.