"A special version of the F-4E to celebrate the 20th anniversary of the ACE COMBAT series."
― Short description from Infinity

is a special version of the F-4E Phantom II designed to celebrate the 20th anniversary of Air Combat. It is featured as a standalone Special Aircraft in Ace Combat Infinity.[1] 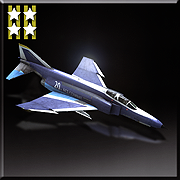 The F-4E -20th Anniversary- was available as a Special Challenge in July 2015. Players had to sortie 20 times in Online Co-Op Missions to complete the challenge and earn the aircraft.

Nickname
Upgrading this aircraft to Level 20 unlocked the Token of Appreciation nickname for use at any time.

Retrieved from "https://acecombat.fandom.com/wiki/F-4E_-20th_Anniversary-?oldid=208815"
Community content is available under CC-BY-SA unless otherwise noted.