is a Special Aircraft variant of the F-4E Phantom II featuring the same navy blue livery used by the ISAF ace, Mobius 1. 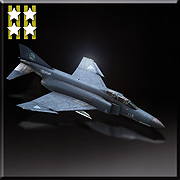 "A special version of the F-4E based on the one flown by a top ace pilot who fought to resist the invasion of a major nation.
With excellent maneuverability and multi-lock-on air-to-air missiles, it is capable of defeating bombers one after the other regardless of their escorts and offers air superiority that rivals the original aircraft. When this aircraft and a handful of others took off from their carrier, and with the Allied Forces facing their most perilous hour, they were seen little more than a shot in the dark - a desperate attempt to postpone defeat. In retrospect, however, it was the start of a tremendous rebellion."
― Hangar

Nickname
Upgrading this aircraft to Level 20 unlocked the Song of Liberty nickname for use at any time.

Flyby over the Adriatic Sea

Retrieved from "https://acecombat.fandom.com/wiki/F-4E_-Mobius1-?oldid=216646"
Community content is available under CC-BY-SA unless otherwise noted.