F-4G Phantom II Wild Weasel
F-4X Phantom II
The F-4E Phantom II is a fighter aircraft developed by McDonnell Douglas. First flown in 1958, it is one of the aircraft most associated with the Vietnam War, as well as one of the most famous and recognized fighters jets in existence. Notable achievements related to the Phantom II are scoring the first and only recorded supersonic gun kill, and being the last American fighter to achieve ace status in the 20th century. It is also the only aircraft to be used by both the USAF's Thunderbirds and the US Navy's Blue Angels. The aircraft was retired in 1995; although the aircraft itself is quite outdated, it is still in use by several nations to this day.

The F-4E is one of the two first aircraft available to the player in the original Air Combat, alongside the F-14A Tomcat. It costs $750,000. Performance-wise, it is a rather average aircraft, as it has low maneuverability and armor, but high power and stability. The Phantom II is only flown by wingmanWilliam. A second F-4 can be unlocked by completing Mission #4, Night Attack on a Coastal City. It is painted green, unlike the original, and has inferior performance.

In Air Combat 22, the F-4E appears as an enemy aircraft.

The F-4E is the first aircraft made available to the player in Ace Combat X.

Online use of the Phantom is generally considered a 'Trophy Fighter' that is seemingly helpless against most other fighters considering its lack of agility, but with a well thought skill set, the Phantom can be a decent re spawn point hunter. Even being able to give mid tier fighters a hard time if used well. In the Fighter-Bomber role, the Phantom does well with its UGB load, as one would expect given its tough armour. Also being one of few aircraft capable of using ECM pods, it can be used as a SAM killer, too, by activating ECM and strafing SAM launchers while they cannot lock and fire on you or allies.

The F-4E makes a return once again in Assault Horizon Legacy. This time, rather than being unlocked through completing campaign missions or even the extra challenge missions, it is earned through the promotion system of the game.

Performance-wise, it is relatively inferior to even the starter F-16C, though thanks to the aerial maneuvers system and the tuning upgrades, this can easily be averted. This aircraft also stands out as having the gunpod secondary weapon, though it would better be suited to using the QAAM or the unguided bomb. 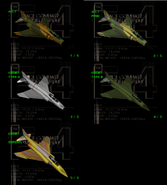 a F-4E shot down a Searcher in Ace Combat Infinity

a F-4E shot down a fighter in Ace Combat Infinity

Retrieved from "https://acecombat.fandom.com/wiki/F-4E_Phantom_II?oldid=95924"
Community content is available under CC-BY-SA unless otherwise noted.