The F-4G Phantom II is a dedicated ground attack variant of the F-4E Phantom II. Similar to the F-4E, the F-4G features low statistics and weaponry, thus it is used as a starter attacker aircraft.

The F-4G was made available through Wernher and Noah Enterprises's Advanced Automated Aviation Plants. The United Nations Forces and its mercenary pilots were able to use these blueprints to purchase their own F-4Gs during Operation Eternal Liberation.

"This air-to-ground attack aircraft is an improved version of the F-4E Phantom II which has been developed to carry out SEAD (Suppression of Enemy Air Defense) missions. It features the same mobility as the F-4E, but can also be equipped with air-to-ground missiles. It is known as the legendary "Wild Weasel" and has received high recognition for its performance during the Gulf War."
― Hangar

Flyby of the "Blue Camo" Skin 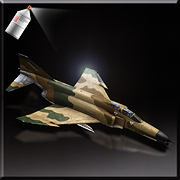 "Known as the "Phantom II Wild Weasel," this attack aircraft is a modified version of the F-4E. It was designed to suppress enemy air defense networks by long-range ground attacks."
― Hangar

Retrieved from "https://acecombat.fandom.com/wiki/F-4G_Phantom_II_Wild_Weasel?oldid=257754"
Community content is available under CC-BY-SA unless otherwise noted.