[Back Again!] PRIDE OF WARDOG

The F-5E -Heartbreak One-

is a modified version of the F-5E Tiger II featuring the livery of Jack Bartlett. It only appears in Ace Combat Infinity as a Special Aircraft. 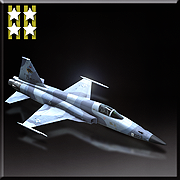 "A special version of the F-5E that resembles the captain's aircraft from a famous tactical fighter squadron. As an aircraft with a long service history and experience in many conflicts, it has the capabilities required to survive fierce battles over and over. The aircraft places an overall focus on speed performance in order to be able to support and backup allies at a moment's notice. The history of the so-called "eternal captain", is long and convoluted as he valued his own life and those of his subordinates more than anything. There is no doubt that he was both an exceptional and unusual pilot, however his deeds on the ground after being shot down and bailing out of this aircraft perhaps exceeded his many feats in the air."
― Hangar

The aircraft was available for the top 3,000 players during the "[Back Again!] Pride of Wardog" Online Co-Op Missions Ranking Tournament in late August 2015.

Nickname
Upgrading this aircraft to Level 20 unlocked the The Shy One nickname for use at any time.

Start a Discussion Discussions about F-5E -Heartbreak One-