is a modified version of the F-5E Tiger II featuring a Pisces theme. It only appears in Ace Combat Infinity as a Special Aircraft. 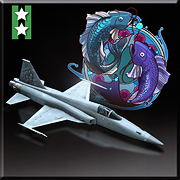 "A special version of the F-5E featuring a Pisces theme.
Speed performance has been improved so that pilots are able to swiftly follow their wingmen.
It moves freely in the sky like a fish swimming in a giant river, making it difficult for all who try to pursue it."
― Hangar

The aircraft was only available as a reward in "King of Aerial Combat" Team Deathmatch Ranking Tournament in early March 2015.

Nickname
Upgrading this aircraft to Level 20 unlocked the Twisting Milky Way nickname for use at any time.

Retrieved from "https://acecombat.fandom.com/wiki/F-5E_-Pisces-?oldid=224080"
Community content is available under CC-BY-SA unless otherwise noted.