is a modified version of the F-5E Tiger II with a special skin featuring the livery of Shin Kazama from Area 88. It only appears in Ace Combat Infinity as a Special Aircraft. 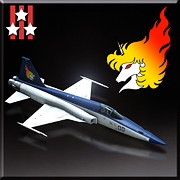 "This is a special version of the F-5E which features the same color scheme as an aircraft flown by Shin Kazama, a character who appears in the Japanese comic, "Area 88". It features excellent handling and turning performance has been improved resulting in an aircraft that has strong air-to-ground and air-to-air combat abilities. In the hands of a skilled pilot, this aircraft is capable of escaping from the most dangerous of situations."
― Hangar

The aircraft was only available as a Limited-Time Drop in October 2014 and August 2015 during the Area 88 Collaboration Event.

Nickname
Upgrading this aircraft to Level 20 unlocked the Devil's Welcoming nickname for use at any time.

from the "Operation: Future Prospect" trailer