The F-5E Tiger II is a small fighter aircraft manufactured by Northrop Grumman.

F-5E's were operated during the Belkan War. A notable unit was the Gabel Squadron led by Heiko Reck.

The ISAF Air Force and the Federal Erusea Air Force both used Tiger II's during the Continental War. One F-5E belonged to the ace pilot "Wang".

In the Circum-Pacific War, F-5E's were used by the Osean Air Defense Force and the Yuktobanian Air Force. The most prominent user was none other than the Wardog Squadron. Another notable pilot was Jack Bartlett, who kept a spare Tiger adorned with his personal emblem and number even though he never used it in the war.

Although no known units saw action during the Valahia Crisis, Antares Squadron had access to the aircraft.

F-5Es were mass-produced and made available using the Advanced Automated Aviation Plant for United Nations Forces pilots to utilize during Operation Eternal Liberation.

"A small scale, lightweight fighter that was developed in America in the 1970s. It is an upgraded version of its predecessor, the F-5A, which was designed to counter the MiG-21, an aircraft that was common in Eastern Bloc countries. The fighter features twin engines, a large main wing and a fire control radar. Despite its low cost, it features excellent handling and maintainability and is currently used in various countries. Its nickname is "Tiger II"."
― Hangar

"A lightweight and easy to fly fighter with respectable capabilities in all areas."
― Hangar description

"A lightweight and easy to fly fighter with respectable capabilities in all areas."
― Hangar description 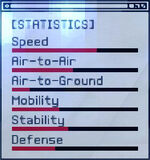 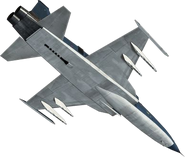 "A low cost, lightweight tactical fighter with respectable capability in all areas. Easy to fly and maintain, the "Tiger II" is employed in air forces around the globe."
― Hangar description

Available at the start of the game.

"A low cost, lightweight tactical fighter with respectable capability in all areas. Easy to fly and maintain, the "Tiger II" is employed in air forces around the globe."
― Hangar description

An F-5E in Yuktobanian colors

Available to purchase at the start of the game. Costs 52,000 credits to purchase.

Retrieved from "https://acecombat.fandom.com/wiki/F-5E_Tiger_II?oldid=260971"
Community content is available under CC-BY-SA unless otherwise noted.