is a modified version of the F/A-18F Super Hornet featuring an Aquarius theme. It only appears in Ace Combat Infinity as a Special Aircraft. 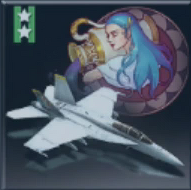 "A special version of the F/A-18F featuring an Aquarius theme.
It features improved speed performance and adjustments have been made to its abilities, resulting in a versatile aircraft.
The way that it dominates both enemies on the ground and in the sky is just like how a flood can cause destruction to everything in its path."
― Hangar

The aircraft was purchasable with 200 Special Supply Tickets from Special Supply Items Catalogue from 1st February 2015 to 30th March 2015, and later made permanently available after May 2016.

Nickname
Upgrading this aircraft to Level 20 unlocked the Spiral Nebula nickname for use at any time.

Retrieved from "https://acecombat.fandom.com/wiki/F/A-18F_-Aquarius-?oldid=266207"
Community content is available under CC-BY-SA unless otherwise noted.