is a Special Aircraft based on the F/A-18F Super Hornet flown by Avalanche Squadron, one of the squadrons that assist Garuda Team in Ace Combat 6: Fires of Liberation.

"A special version of the F/A-18F based on the "Avalanche Squadron" that was used to resist the invasion of a neighboring nation. With excellent anti-ship and speed capabilities, it specializes in hit-and-away[sic] tactics."
― Hangar

This aircraft was only available to the top 5,000 participants in the "[Back Again!] Fires of Liberation" Online Co-Op Missions Ranking Tournament in late September 2015 to early October 2015

Nickname
Upgrading this aircraft to Level 20 unlocked the Aviation Corps of the 2nd Carrier nickname for use at any time. 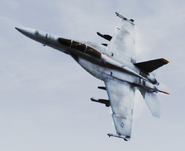 Retrieved from "https://acecombat.fandom.com/wiki/F/A-18F_-Avalanche-?oldid=254779"
Community content is available under CC-BY-SA unless otherwise noted.