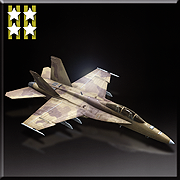 "A special version of the F/A-18F based on the first aircraft from "Beast Squadron," a fighter squadron that fought during an internal United Nations conflict. Tuned entirely for maneuverability, the movements of his aircraft resemble those of a blood-hungry beast seeking its prey. The original pilot was known for his naked fighting spirit and cunningness to do whatever it takes to win. The pilot was the leader of a unit that was known for its cruelty and contempt of others. The unit fought the Special Tactical Fighter Squadron, but failed to draw blood. Even after being shot down and neutralized, he continued to demand for the right to fight again."
― Hangar

This aircraft was only available to the top 1,000 participants in the "Lancers charge!" Naval Fleet Assault Team Deathmatch Ranking Tournament

Nickname
Upgrading this aircraft to Level 20 unlocked the Eater nickname for use at any time.

Retrieved from "https://acecombat.fandom.com/wiki/F/A-18F_-Beast-?oldid=257036"
Community content is available under CC-BY-SA unless otherwise noted.