is a modified version of the F/A-18F Super Hornet based on HARV program by NASA. It only appears in Ace Combat Infinity as a Special Aircraft. 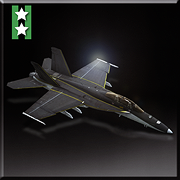 "A special version of the F/A-18F featuring gold pinstripes on a black surface. As a carrier-based fighter attacker, it features both excellent air defense and air-to-ground combat abilities. Its speed and maneuvering capabilities as well as other elements have also been enhanced. Featuring a beautiful color design, it would be no surprise for people to start calling this aircraft the "Black Beauty"."
― Hangar

This aircraft was only available as a Ranking Tournament reward in September 2014.

Retrieved from "https://acecombat.fandom.com/wiki/F/A-18F_-Black_Hornet-?oldid=139923"
Community content is available under CC-BY-SA unless otherwise noted.