is a modified version of the F/A-18F Super Hornet featuring the livery of the United States Navy VFA-103 Strike Fighter Squadron, nicknamed the "Jolly Rogers".

This livery was available as a DLC skin for Ace Combat: Assault Horizon, and later appeared in Ace Combat Infinity as a Special Aircraft. 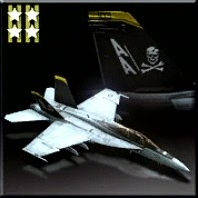 "A special version of the F/A-18F Super Hornet featuring a special insignia of Strike Fighter Squadron 103, an aviation unit of the United States Navy.
The aircraft features excellent aircraft performance and balance. In 2004, Strike Fighter Squadron 103, also known as "Jolly Rogers", changed its squadron name from "VF-103" to "VFA-103". The squadron also changed its aircraft from the "F-14" to the "F/A-18F" Super Hornet.
*"Jolly Roger" logo and aircraft paint pattern used with permission of the United States Department of Defense.""
― Hangar

Nickname
Upgrading this aircraft to Level 20 unlocked the Conqueror of the Ocean nickname for use at any time.

Banner advertising the aircraft and the AV-8B -Aquarius-

Retrieved from "https://acecombat.fandom.com/wiki/F/A-18F_-Jolly_Rogers-?oldid=224087"
Community content is available under CC-BY-SA unless otherwise noted.