is a modified version of the F/A-18F Super Hornet featuring the livery of VMFA-232. It only appears in Ace Combat Infinity as a Special Aircraft. 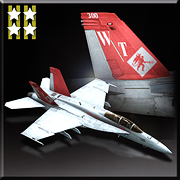 "A special version of the F/A-18F based on Marine Fighter Attack Squadron 232 (VMFA-232). Nicknamed the "Red Devils", they are the most decorated fighter squadron within the US Marine Corps. This high performance, multirole supersonic combat jet features the distinctive "Red Devil" insignia on the vertical tail fins.
It is the destiny of pilots who command this aircraft to traverse across various battlefields engaging in challenging missions.
*"Red Devil" logo and aircraft paint pattern used with permission of the United States Department of Defense."
― Hangar

The aircraft was only available as an Online Co-Op Missions Ranking Tournament reward in early December 2014.

Retrieved from "https://acecombat.fandom.com/wiki/F/A-18F_-Red_Devils-?oldid=139925"
Community content is available under CC-BY-SA unless otherwise noted.