It debuted in Ace Combat 6: Fires of Liberation and sporadically appeared in subsequent games. It made its most recent appearance in Ace Combat 7: Skies Unknown.

In 2014, the IUN-PKF's Mobius Squadron utilized the aircraft against a resurgent Free Erusea.[1]

In 2015, numerous Super Hornets were deployed during the Emmeria-Estovakia War by the Estovakian Navy, Republic of Emmeria Navy and Republic of Emmeria Air Force;[2] Emmeria's Avalanche Squadron were notable users of the aircraft.[3] In 2016, during the first cruise missile attack on Gracemeria, an Estovakian F/A-18F ace, Vaslav Reynek, callsign "Dama", was tasked by rebellious Estovakian officers[4] to report on the to Gracemeria damage caused by the Chandelier,[5] however, he was ultimately shot down by Talisman in battle.[6]

Super Hornets continued to be fielded in the Lighthouse War by the Osean Maritime Defense Force as well as the Erusean Air Force.[7][8] During an Osean operation over the Waiapolo Mountains an Erusean F/A-18F ace, First Lieutenant Hans Weber, callsign "Spider", engaged the Osean Spare Squadron, but was shot down by Trigger. Erusea also developed autonomous drone F/A-18Fs which were used for deception and as escorts.[9][10] In addition to the F/A-18F units operated by the OMDF and Erusea, Spare Squadron member Full Band used a refurbished F/A-18F as his personal aircraft.[11]

On June 30, 2020, at the Redmill Air Force Base ceremony commemorating the 25th anniversary of the end of the Belkan War, the Osean Air Defense Force displayed an ADFX-01 Morgan. A select few photographers were given permission to ride in an F/A-18F Super Hornet to fly alongside and take photographs of the experimental aircraft.[12] Also showcased at the ceremony, were Super Hornets belonging to the Emmerian Navy's Avalanche Squadron and the IUN-PKF's Mobius Squadron.[13]

F/A-18F Super Hornets were used by Warwolf Squadron when they fought against Big Bear Squadron who had defected to the New Russian Federation.[14]

The F/A-18F was one of the many aircraft designs sold to Wernher and Noah Enterprises for their Advanced Automated Aviation Plant. This model of aircraft was very popular during Operation Eternal Liberation, being used by both the USEA Federation and the United Nations Forces extensively in almost all theaters.[15]

"A versatile carrier-based fighter capable of providing support for aircraft, ground forces, and ships. With better maneuverability at medium speeds than high-speed fighters, it is effective in air raids. Nicknamed "Super Hornet," the craft is an improved F-Type."
― Hangar

Main Game: The F/A-18F is available on the Aircraft Tree and costs 285,000 MRP. It requires purchasing the F-14D Super Tomcat.
VR Mode: Available at the start of the game.

A Super Hornet on a runway

A Mobius Squadron Super Hornet taking off from an aircraft carrier 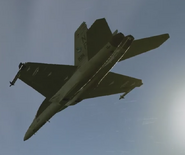 A Super Hornet taking off

A Super Hornet taking off

Super Hornets taking off from an aircraft carrier

An OADF Super Hornet taking off

An F/A-18F equipped with an EML

A teaser of the in-game cockpit

Flyby over a scrapyard

A squadron of Super Hornets 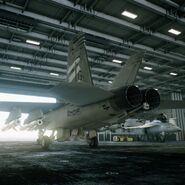 "Whether it's air-to-air or air-to-ground, this carrier-based fighter is capable of handling a wide variety of missions. An easy-to-handle aircraft that boasts stable maneuverability at any speed. Equipped with long-range attack weapons, it's well-suited for preemptive attacks. Nicknamed the "Super Hornet"."
― Hangar 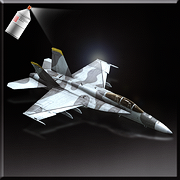 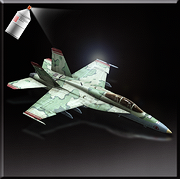 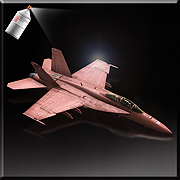 "Whether it's air-to-air or air-to-ground, this carrier-based fighter is capable of handling a wide variety of missions. An easy-to-handle aircraft that boasts stable maneuverability at any speed. Equipped with long-range attack weapons, it's well-suited for preemptive attacks. Nicknamed the "Super Hornet"."
― Hangar

"The F/A-18F achieves superb handling while maintaining nearly flawless stability. The combined payload capacity of air-to-ground and air-to-air SP weapons and missiles promise increased battle performance. With the capability to quickly adjust to the conditions of virtually any battlefield, the F/A-18F is a true multirole aircraft."
― Hangar

An F/A-18F in Emmerian colors

An F/A-18F in Estovakian camouflage

An F/A-18F in the Estovakia SP scheme

A Super Hornet preparing for a landing

A Super Hornet preparing for a landing

A Super Hornet landing on an aircraft carrier

A Super Hornet about to take off

Retrieved from "https://acecombat.fandom.com/wiki/F/A-18F_Super_Hornet?oldid=266101"
Community content is available under CC-BY-SA unless otherwise noted.