Ace Combat 5: The Unsung War
Ace Combat X: Skies of Deception
Ace Combat: Joint Assault
Ace Combat Infinity
Ace Combat 7: Skies Unknown
The FB-22 Strike Raptor (FB-22 Concept or F/B-22 Concept in previous games) is a conceptual attacker variant of the F-22A Raptor. While the F-22A is capable of anti-ground attack, the FB-22 is designed to enhance that capability with increased stealth and a larger payload.

The FB-22 was introduced in Ace Combat 5: The Unsung War, prior to the real-life design proposal being cancelled. Since then, it only appeared in Ace Combat X: Skies of Deception and Ace Combat: Joint Assault before returning to consoles in Ace Combat Infinity. Its latest appearance is in Ace Combat 7: Skies Unknown as part of the Experimental Aircraft Series DLC.

The FB-22 has only seen limited use in the Strangereal universe. The Yuktobanian Air Force owned one FB-22 flown by the ace pilot "Proteus," who participated in the attack on November City, Osea. He was shot down by Wardog Squadron.[1]

The Leasath Air Force owned at least half a dozen FB-22s during the Aurelian War. One FB-22 squadron was deployed to Sachana Air Base and later provided reinforcement for Leasath forces at the Kalana Steppes. The FB-22's increased stealth allowed the squadron to remain undetected until they reached the battle area, catching the Aurelian Air Force by surprise. Aurelia's Gryphus Squadron shot down the FB-22s.[2]

"A supersonic stealth fighter based on the F-22 with improved anti-ground capabilities. The new craft has been redesigned with delta wings and a longer fuselage, while keeping the twin high-power engines and stealth body from the original model. A larger wing area now allows for weapons to be mounted beneath the main wings; combined with an expanded weapon bay, this improved fighter now boasts grater heavy bomber capabilities and can endure protracted battles. Its exceptional stealth capabilities and powerful long-range missiles also pose a significant threat to targets beyond visual range, making it a versatile aircraft that can not only suppress ground targets, but can also excel in air defense and acquiring air superiority."
― Hangar

"A fighter bomber derived from the F-22.
It features a redesigned airframe to improve the stealth and supercruise abilities featured in the prototype. The main wing is made of a delta wing configuration and to increase air-to-ground attack capabilities, its body has extended to expand its weapon bay. The aircraft has been developed as the successor to other large-scale aircraft to sortie on bombing missions."
― Hangar 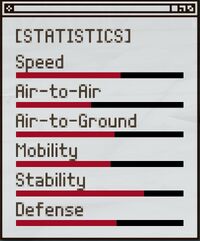 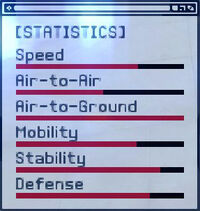 "A concept attack aircraft based on the F/A-22. Not as capable in aerial combat, but its improved stealth technology and larger payload enable unprecedented air-to-ground attack capabilities."
― Hangar