Start a Wiki
watch 02:47
The Loop (Games)
Do you like this video?
pencil
All right, gentlemen, it's time to clean house!
This article or section may require a cleanup to meet Acepedia's quality standards.

Fiona Chris Fitzgerald was born on January 26, 2016 somewhere on the Usean continent. Her parents were wealthy members in the upper hierarchy of General Resource Limited.[2]

Since she was a child, she received special education to become a pilot for selected children. At the age of 22, she received the Master of Arts in Aviation Engineering and Research from studying at Edwards University. Fiona joined the UPEO in 2039, and currently she works in SARF as a pilot.

Her first mission in the corporate war was to stop Neucom transports over Expo City along with other SARF members. From then on, she flew on various missions for SARF. Until the decision point at Mt. Lambert.

There are four possible 'fates' for Fiona from the Corporate War. Three paths lead to her death, and on the last, she lived.

Fiona was flying a R-505U transport aircraft carrying UPEO top ranking officer, Gabriel W. Clarkson. On the vicinity of Mt. Lambert, she was intercepted by General Resource's fighters. The outcome of this mission determines her fate.

If Nemo decides to join General Resource, Nemo will shoot down Fiona's aircraft in this mission.

If Nemo stays with UPEO, he will face another decision. In the decision, if Nemo chooses to stay with UPEO, then Fiona will be shot down.

If Nemo decides to spare Fiona's life, she and Nemo will join Neucom Inc.

Fiona and Nemo joined NEU. Inside Neucom, Fiona reunites her sister, Cynthia. Their first mission is to destroy General Resources' facility in White Valley. After the destruction of the base, she was arguing with her sister about Sublimation. Apparently, Fiona is strongly against her sisters' idea on Sublimation. This conflict reached it's peak in another mission in White Valley.

After the mission, there was another decision for Nemo. If Nemo decide to follow Cynthia and join Ouroboros, Fiona will be killed in one of Ouroboros' raids.

If Nemo stays in Neucom, Fiona, sad of her sister going to the 'dark side' continued her missions. She began fighting Ouroboros and after the final battle inside Geofront, she and Nemo returned to Neucom.

In the Neucom ending, Fiona was sitting inside her apartment, looking at a hologram of herself and her sister. Then a message came from the sublimed Cynthia. After the message, Fiona, filled with anger and sadness, threw the hologram and cried. 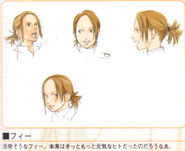 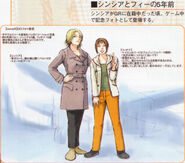 Fiona and her sister 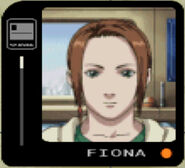 Retrieved from "https://acecombat.fandom.com/wiki/Fiona_Chris_Fitzgerald?oldid=259254"
Community content is available under CC-BY-SA unless otherwise noted.